This has been a criticism of mine about Authenticode, and recently I stumbled on a new feature in Authenticode, called sealing, that supposedly fixes two of the three ways that Authenticode allows post-signature changes.

It looks like Authenticode sealing aims to make these stuffing tricks a lot harder. Before we dive in, I want to disclaim that sealing has literally zero documentation from Microsoft. Everything forward from here has been me “figuring it out”. I hope I’m right, but welcome corrections. I may be entirely wrong, so please keep that in mind.

Recall that two ways of injecting data in to an Authenticode signature can be done in the signatures themselves, because not all parts of the signature are actually signed. This includes the certificate table as well as the unauthenticated attributes section of the signature. Sealing prevents those sections from changing once the seal has been made.

It starts with an “intent to seal” attribute. Intent to seal is done when applying the primary signature to a binary. We can apply an intent to seal attribute using the /itos option with signtool. For example:

At this point the file has a primary signature and a timestamp, but the signature is not valid. It has been marked as “intent to seal” but no seal has been applied. Windows treats it as a bad signature if I try to run it. 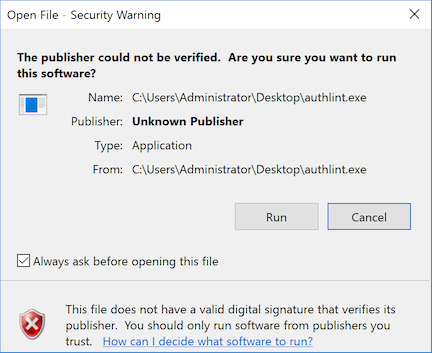 Now at this point I could add a nested signature, if I want, since the seal hasn’t been finalized. I’ll skip that, but it’s something you could do if you are using dual signatures.

The next step is to seal it:

Now we have a sealed signature. What happens if I try appending a signature using the /as option? I get an error:

What this all culminates to is that a seal is a signature of the entire signature graph, including the things that were being used to cheat Authenticode in the first place.

Sealing appears to be an unauthenticated attribute itself which contains a signature, same for the timestamp. It wold seem that sealing is, in a strange way, Authenticode for Authenticode. The difference being is that a sealing signature has no concept of unauthenticated attributes, and it uses the certificates from the primary signature. That leaves no room for data to be inserted in to the signature once it has been sealed.

This has some interesting uses. As a signer, it gives me more power to ensure my own signed binaries do not get tinkered with, or signatures get appended, or somehow inserting tracking beacons. If someone were to do so, they would invalidate the sealing signature. They cannot remove the seal because the primary signature has the Intent to Seal attribute, which cannot be removed, either. They can’t re-seal it with a different certificate without completely re-signing the primary signature, too.

As a consumer of signed executables, this doesn’t make a huge impact on me, yet. It would be interesting and exciting to see Windows’s security UX take sealing in to consideration. The UAC and Mark-of-the-Web dialogs could conceivably give a more secure indicator if the file is sealed. This would mean that for authors to insert tracking data in to their binaries, they would have to completely re-sign the executable, which is expensive and why they don’t do it in the first place.

As a reminder, these are my observations of sealing. There is no documentation about sealing that I am aware of, but based on the behavior that I observed, it has some very powerful properties. I hope that it becomes better documented and encouraged, and eventually more strictly enforced.

As for using sealing, I would hold off for now. Its lack of documentation expresses that it may not be fully ready for use yet, but it will be interesting to see where this goes.