To back up a bit, Authenticode is the scheme that Microsoft uses to digitally sign DLLs, EXEs, etc. It’s not a difficult thing to do, but it does offer enough flexibility that it can be done in a sub-optimal way. The linter is made up of a series of checks that either pass or fail.

When you sign a binary, the signature is embedded inside of it (usually, there are exceptions). The goal of the signature is to ensure the binary hasn’t been tampered with, and that it comes from a trusted source. The former presents a problem.

If I were to take a binary, and computer a signature on it to make sure it hasn’t changed, then embed the signature in the binary, I just changed the contents of the binary and invalidated the signature I just computed by embedding it.

To work around this problem, there are some places inside of EXEs that the digital signature process ignores. The notable one being the place that signatures go. So the section that signatures go is completely ignored, as is the checksum of the file in the optional header.

Now we have tamper-proof binaries that prevent changing the executable after its been signed, right?

Ideally, yes, but unfortunately, no. There are some legitimate reasons to change a binary after its been signed. Some applications might want to embed a per-user configuration. Re-signing the executable on a per-user basis is to costly in terms of time and security. Signing is relatively fast, but not fast enough to scale reasonably. It would also mean that to perform the re-sign, the signing keys would need to be available to an automated system. That’s generally not a good idea, as a signing key should either be on an HSM or SmartCard and always done by one (or more if using m/n) person manually.

It turns out it is possible to slightly modify an executable after its been signed. There are a few ways to do this, and I’ll cover as many as I know.

The first is some clever people noticed that you could abuse the location where signatures are stored (and thus not part of the signature itself) in binaries to store things other than signatures. Ultimately what ends up getting placed in the signature location in a binary is a structure called WIN_CERTIFICATE. This structure includes a field called “length” indicating the length of the structure, and “bCertificates” which is an array of whatever data type is specified. The structure name is poorly named. The structure can contain things other than certificates, like signatures. In almost every case it will always contain a signature.

The data that does end up going in WIN_CERTIFICATE is PKCS#7 data (1.2.840.113549.1.7.1) that contains the signature. This is in a structured format called ASN.1. ASN.1, ultimately has its own “length” for its data. The length is actually a little tricky to calculate, but by following the data structure you know where it begins and ends. Let’s imagine this whole thing like this:

The WIN_CERTIFICATE has a length of 16, but the signature data only has a length of 10. What are the other 6 bytes? Under normal circumstances, those other 6 bytes are all zeros. However, it turns out that Windows doesn’t care what those bytes are. They can be anything. The whole WIN_CERTIFICATE structure is ignored during the signing and verification process, so changing those extra bytes doesn’t impact it. It doesn’t appear as garbage either as part of the signature because Windows is using the PKCS#7 structure to determine its length. It stops processing the signature once it reached the end of the signature.

For historic reasons, the place where the signatures in the file go must always have a length that is a multiple of 8. That accounts for why there are two lengths. This problem wouldn’t exist if WIN_CERTIFICATE didn’t have a length at all and was always assumed to be the length of the PKCS#7 data.

Keep in mind that this extra data doesn’t change the behavior of the program. The code (.text section) isn’t changing. It’s vestigial data, but the program can be written to read the data from itself and do something with it. Hopefully none of those programs actually try to use this extra data as actual code.

Microsoft actually tried to fix by checking that the extra data is all zeros. It was opt-in with the registry using a value called EnableCertPaddingCheck with the intention of enabling it by default after a period of time to allow people to fix it. Later on, they backtracked on those plans and have withdrawn their plans to make it the default, but have left the registry as an option.

I can only guess as to why they withdrew their plans, but I would say it was for two reasons. The first being is it broke software, probably more than they expected. The second being that it was an incomplete fix. As we’ll see there are other ways we can embed data post-signing. Breaking software visibly but not getting any benefit from it doesn’t make sense.

You can sign a binary with a signature, but can also sign a signature. That’s called a counter signature, and the most common use of them in Authenticode is timestamps. This also has the same problem that binaries do. There must be a place in the signature to place other signatures without invalidating the signature by signing it. So, like binaries, there are places inside of signatures that aren’t used when computing a signature. These are called unauthenticated attributes.

These attributes are mutable post-signing without changing the signature.

This one is interesting and is what prompted me to write this post in the first place.

A digital signature is allowed to include additional certificates within itself to help the signature verifier build a chain back to a trusted certificate (that in itself is worth another post). Much like TLS, it can include as many certificates as it wants, regardless if it participates in the chain or not. Or possibly there is more than one chain that could be built if a certificate is cross-signed.

The certificates that are part of the signature are also not verified like the Unauthenticated Attributes. This allows someone to inject or replace a certificate. This appears to be what Chrome’s latest installer is doing.

Chrome’s signature includes a certificate called “Dummy Certificate”. This certificate is a bit odd, as it has an extension that is a few kilobytes. Not impossible or bad, but it stands out. This extension has an OID of “1.3.6.1.4.1.11129.2.1.9999”. Looking at its contents, it appears to contain additional information very similar to Dropbox’s. Most of the content of the attribute is nulls, presumably to leave plenty of space for more data if they ever need it. 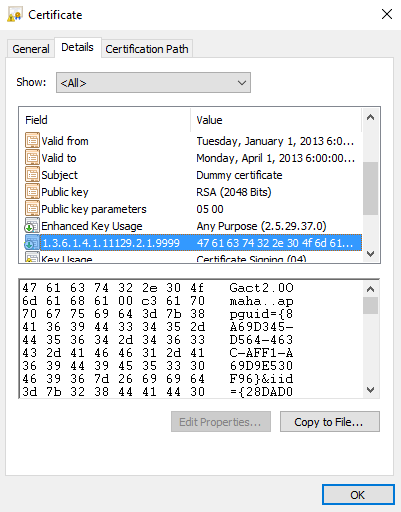 This is a rather interesting technique, and I’m not sure what value it provides over the Unauthenticated Attributes other than it’s a bit harder to spot. It does require creating a new certificate every time, since you cannot change an existing one.

The similarity of the data to Dropbox’s made me think that this is likely being done by a tool. Indeed, after a bit of digging, it appears that Google’s Omaha project contains Go code for doing this. Dropbox is probably just using an older version of the tool that uses WIN_CERTIFICATE padding as the README seems to imply it once did.

I’m not sure. Clearly many organization that are security conscientious are doing it, so they are at least willing to accept that any risks are worth the result. I would recommend not doing it, if it can be helped. While doable, getting these things right can be hard.

You might also consider the privacy implications of this for installers. These watermarked installers can tell a lot about you if you’re using a unique installer. They know how much time has passed between downloading and installing, how many times the installer is run, and if you were signed in to an account when you downloaded the installer, it’s very likely that’s tied to the installer, too.

Authenticode Lint will attempt to flag all of these scenarios.